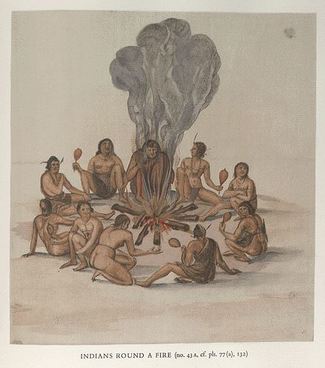 Image - John White Watercolor
When the first colonists arrived at Jamestowne in 1607, they immediately met with Indian people on the Eastern Shore of Virginia. These Indians belonged to a vast Powhatan autocracy and spoke Algonquian languages. In the piedmont and mountain regions of this area lived Siouan Indians of the Monacan and Mannahoac tribes, arranged in a confederation ranging from the Roanoke River Valley to the Potomac River, and from the Fall Line at Richmond and Fredericksburg west through the Blue Ridge Mountains.

At this time, the Virginia Siouans numbered more than 10,000 people. They were an agricultural people who grew the “Three Sisters” crops of corn, beans and squash, and they had domesticated a wide variety of other foods, including sunflowers, fruit trees, wild grapes and nuts. They lived in villages with palisaded walls, and their homes were dome-shaped structures of bark and reed mats. These Monacan ancestors hunted deer, elk and small game, and they would leave their villages every year to visit their hunting camps. The Monacans traded with the Powhatans to the east and the Iroquois to the north. They mined copper, which they wore in necklaces, and which the Powhatans prized greatly. The Monacans also buried their dead in mounds, a tradition that differentiates them from neighboring Indian nations. Throughout the piedmont and mountain regions, thirteen mounds have been identified and many excavated, yielding interesting information about the lives of these First Americans, whose ancestors inhabited this region for more than 10,000 years.
A party of scouts explored the future Amherst area in 1742, preceding the development of the Hat Creek Presbyterian Colony, in present Campbell County. They found only one aged white man living within a 45-mile radius. According to a local history, “the region was inhabited by Indians who disputed its possession and offered combat with the whites from the very first. Some were of the Sapon (Saponi) nation but most of these red men were of the Tuscaroras tribe and were commonly known as Monacans.”

In the 1750s, Thomas Jefferson described a party of passing Indians on his property (near Monticello) who visited a burial mound there. They stayed at the mound for quite some time, with expressions of sorrow on their faces, and then went on their way. Because the Monacans of Amherst County were the only Siouan Indians remaining in the mound region at this time, it is assumed that they were these travelers. The episode shows that the Monacan people knew their ancestors were buried in the mounds and still visited them to grieve. Jefferson later excavated this mound, finding numerous graves inside. He has become known as “the father of American archaeology” because he documented his findings.

The Town of Lynchburg was established in 1786. Prior to this, a settlement had developed at Bethel, on the James River, and both Indian and white people were known to live there. According to one source, “It is common knowledge among older people of the area that the graveyard (at Bethel) contains a mixture of Whites and Indians who have lived in the vicinity for the past two centuries.”

By 1807, the settlement of Monacan ancestors on Johns Creek had been named “Oronoco,” after a type of dark-leaf tobacco grown in the area. One source has suggested that the Indians helped their new neighbors to grow this tobacco, thus contributing greatly to one of the greatest tobacco markets in the world at that time, which became the City of Lynchburg. The settlement at Oronoco was listed as a post town on a map of the county, and from this settlement grew the modern Monacan Nation..

An 1864 Map of Amherst, including Bethel (lower left), Bear Mountain (center) and Pedlar Mills (upper left). See http://www.shasteen.com/genealogy/Map_AmherstVA_CW.htm
The Virginia legislature passed a Race Law in 1823, which declared that any child of an Indian, and any descendant of a Negro, up to the great-grandchild, would be counted as a mulatto. This designation was used for all non-whites in Virginia until after the Civil War.

In 1831, William Johns purchased 52 acres of land on Bear Mountain. In 1833, he bought another 400 acres, and this land became a settlement for the Indian families related to him. One source states, “It was the people on Bear Mountain who cohered and maintained an identity through one another. It was also this community that became the target of prejudice and misunderstanding.” In 1850, the census recorded 29 families, mostly large, related to the Bear Mountain settlement and Monacan community. In 1856, Will Johns divided his lands among his sons and daughter. Five years later, at the age of 91, he died. In 1860, the Amherst County Clerk's Office recorded, among the names of free persons of color, the Monacan surnames of Beverly, Branham, Johns, Pinn and Terry.

In 1868, a parcel of land was donated for a meeting place for the Indian people. At the time, churches and schools were provided for whites and for blacks, but not for Indians. Originally, a wooden arbor served as the meeting place, and itinerant ministers began to hold Baptist and Methodist services there. Shortly thereafter, a log building was built, to be used for the meeting place. The new church served about 350 Indian people. This building later became the Indian mission school, which still stands at the foot of Bear Mountain and is now a registered national historic landmark.

An 1896 newspaper article about the Indian community described them this way: “The older part were typical Indians, of a rich copper color, high cheek-bones, long, straight black hair, tall and erect in form.” The Monacan community was called “the Indian settlement” from everyone's earliest memory, the article stated.

In 1908, Reverend Arthur Gray proposed to build a chapel near “the center of the territory occupied by the tribe.” At this time, Rev. Gray was conducting one service each month at the log cabin schoolhouse. He stated, “These Indian people are increasing rapidly, and one could almost say that they are making a separate nation.” 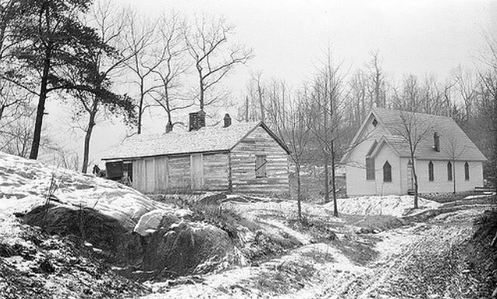 Amherst Mission at Falling Rock, Church and Log Cabin Schoolhouse, 1914. (Jackson Davis collection, 1914, Special Collections, University of Virginia.)
Virginia passed its Racial Integrity Law in 1924, which prohibited intermarriage between those considered white and those having any mixture of colored blood more than one-sixteenth. This law was to have a disastrous effect on the Monacan people and resulted in many of their records being changed by state officials without their knowledge. Many Monacans left the state during this time, because they were no longer permitted to marry freely or to register as Indian in any official capacity. Indian children were at this time attending a first-to-seventh-grade school at Bear Mountain, and some were known to walk five miles each way to reach the school.

During this period, Monacans began challenging the official classifications of their race by state officials and census takers. The debate continued through 1942, when several Monacans led a legal challenge to the state's actions, and Dr. Walter Plecker, who headed the state Bureau of Vital Statistics, was forced to admit that he had no scientific evidence ascertaining the Monacans' race. In 1943, Monacans challenged the local draft board successfully resolving their incorrect racial classification for the World War II draft.

During the early part of the century, most of the Indian people had been tenant farmers, cropping shares, but they were forced finally to change to day work, cutting pulpwood and working seasonally at the local fruit farms. In 1946 the owner of two fruit farms, which employed many of the Indian families, agreed to provide a truck to transport the children to school and church. The people divided themselves into two groups, those with lighter and darker appearances, and the Presbyterian Church formed a separate mission and school at Pedlar Mills. During harvest season, the fruit farms had to set up three tables at lunchtime, for white, Indian, and black laborers.

A 1956 article in the Amherst paper noted the lack of secondary education being provided to mission children in the area, and in 1963, the County proposed a $30,000 bond to build an Indian school for the mission community. The proposal was voted down, and 23 students applied for transfer to public schools. In Richmond, the applications were approved, and the old mission schoolhouse closed as its students entered public schooling for the first time. 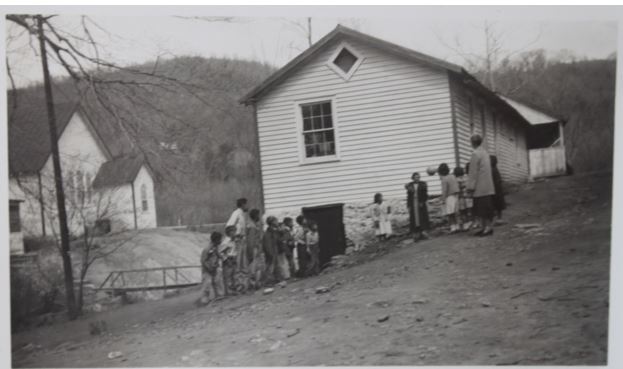 Monacan people socializing at the mission sometime in the late 1950s or early 1960s.
The mission, now called St. Paul's mission, began holding its annual Homecoming Reunion and Bazaar in 1969, an event that is still enjoyed yearly in October by many county residents, and in 1970 a five-acre parcel was purchased by the church, still used as a recreational area for the tribe. In 1979, a federal Native American grant established a pottery cooperative at the mission, and some important pieces were produced, several of which were sold to the Smithsonian Museum in Washington, D.C. The next year, a parish hall was added to the mission, and in 1981, the Mattaponi-Pamunkey-Monacan Consortium was created, the first intertribal consortium in Virginia, which obtains funding from the U.S. Department of Labor to create jobs and job training for Indian people in the state.

The tribe became a state-registered corporation in 1988, and in 1989, it was recognized by the Virginia General Assembly as one of the eight indigenous tribes of the state. In 1993, the tribe became a registered nonprofit organization, developed a museum steering committee, and held its first annual Powwow in Bedford County. With the funds raised from this event, the tribe purchased 110 acres of land on Bear Mountain, to be held in trust for its future generations. A tribal scholarship fund was also established at this time.

In 1994, the tribe began negotiating with the Episcopal Diocese of Southwest Virginia to open a tribal museum at the mission site, and in 1995 the Church made history by returning the deed to 7.5 acres of its property to the Monacan Tribe. The mission school building was accepted into the Virginia Register of Historic Places, and in 1996 the Bear Mountain log cabin was added to the National Register of Historic Places. In 1997, the tribe petitioned the Virginia Council on Indians to request legislation enacting corrections to birth certificates and other official documentation at no charge to tribal members. With the passing of this new bill, nearly a century of state-sanctioned racial oppression ended for Monacan people. Also in 1997, the tribe obtained its first grant from the federal Administration for Native Americans, to conduct historical research that will help them to obtain federal recognition as an Indian tribe. 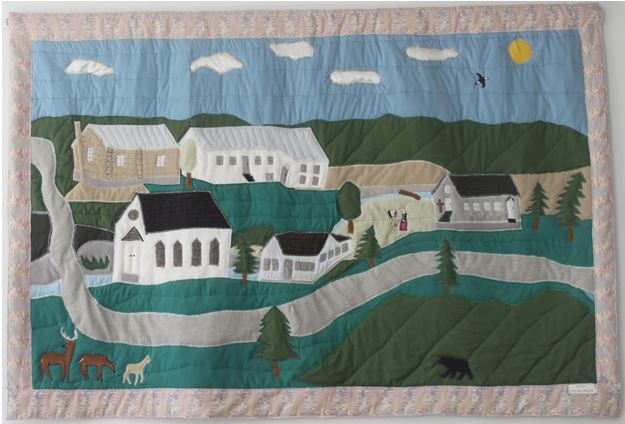 This quilt, depicting Bishop Heath Light of the Episcopal Diocese of Southwestern Virginia shaking hands with former Monacan chief Kenneth Branham, is the work of Pat McCauley, wife of Monacan tribal member Tommy McCauley. It was made to commemorate the return of seven-and-a-half acres of Monacan land to the tribe in 1995.
The Monacan Nation, headquartered in Amherst County, has survived almost four hundred years since the first settlers landed at Jamestowne. Today the tribe numbers over 2,000 people, as more descendants discover their heritage and return to Amherst to celebrate their Indian culture. The tribe operates numerous programs designed to assist tribal members and to educate the general public. It has paid off its land purchase on Bear Mountain and acquired new parcels as well. The Monacan Nation, one of the few American Indian nations that still remain in their ancestral homeland, has made significant contributions to Virginia's history and development, and it continues to be a strong group, dedicated to the survival of Indian people in Virginia and throughout the hemisphere..